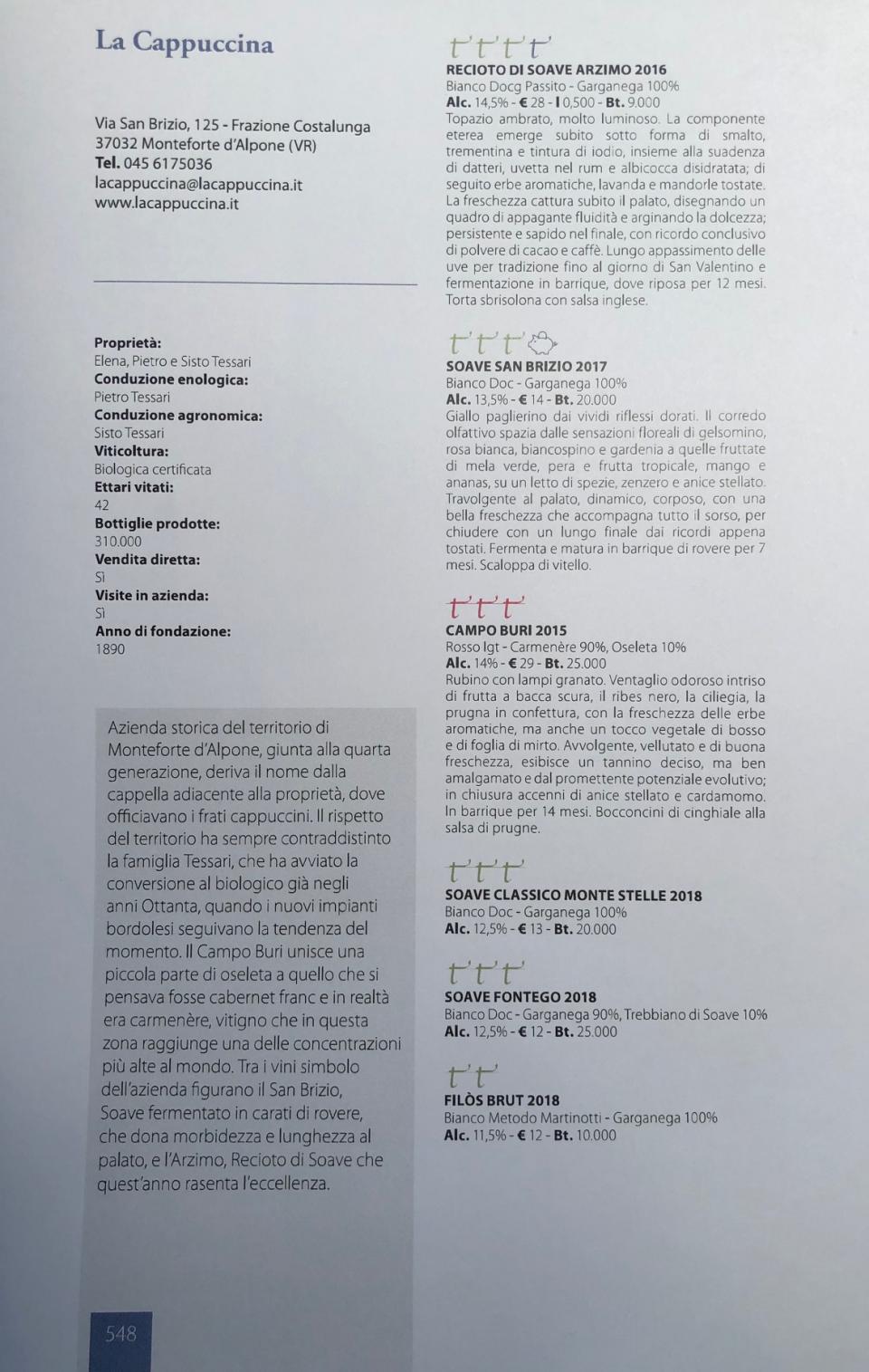 almost 4 viti with our ARZIMO

Historical winery of the territory of Monteforte d'Alpone, now in its fourth generation, derives its name from the chapel adjacent to the property, where the Capuchin friars officiated.

Respect for the territory has always distinguished the Tessari family, which started the conversion to organic as early as the 1980s, when the new red plants followed the trend of the moment.

The CAMPO BURI mixes a small part of oseleta variety to what was thought to be cabernet franc and in reality it was carmenère, a vine that in this area reaches one of the highest concentrations in the world.

Among the company's symbolic wines include SAN BRIZIO, Soave fermented in oak barrels, which gives softness and length to the palate, and ARZIMO, Recioto di Soave which this year borders on excellence.

Amber topaz, very bright. The ethereal component immediately emerges in the form of enamel, turpentine and tincture of iodine, together with notes of dates, raisins in rum and dehydrated apricot; below aromatic herbs, lavender and toasted almonds. The freshness immediately captures the palate, drawing a picture of satisfying fluidity and curbing sweetness; persistent and sapid in the finish, with a final recollection of cocoa powder and coffee. Long drying of the grapes by tradition until Valentine's Day and fermentation in barrique, where it rests for 12 months.
Suggested with Sbrisolona cake with English sauce.

Soave San Brizio 2017
Straw yellow with vivid golden reflections. The olfactory outfit ranges from floral sensations of jasmine, white rose, hawthorn and gardenia to fruity ones of green apple, pear and tropical fruit, mango and pineapple, on a bed of spices, ginger and star anise. Overwhelming on the palate, dynamic, full-bodied, with a beautiful freshness that accompanies the whole sip, to end with a long finish with just toasted memories. Ferments and ages in oak barrels for 7 months.

Campo Buri 2015
Ruby with garnet flashes. A perfumed fan full of dark berries, blackcurrant, cherry, plum jam, with the freshness of aromatic herbs, but also a vegetal touch of boxwood and myrtle leaf. Enveloping, velvety and of good freshness, it shows a definite tannin, but well blended and with a promising evolutionary potential; in closing, hints of star anise and cardamom. In barrique for 14 months.

Suggested with Pieces of wild boar with plum sauce.

LIFE  The origins of this historical estate date back to 1890, but La CAPPUCCINA has always stood out for its look to the future: first, following the 1985 frost, it replaced the vineyards and started ORGANIC management, then acquired the vineyards of Monte Stelle, built the winery and barrel cellar in the 2000s, and finally restored the eighteenth century chapel.